Regional airports are the lifeblood of regional communities. They provide a gateway for the attraction of tourists, support business travel, provide communities with fast access to medical services and delivery essential goods and services.

The domestic Australian aviation market is unique compared to others around the world.

In contrast, regional air services and supporting infrastructure is often a forgotten aspect of the broader industry. This sector has much lower, albeit slowly growing passenger volumes, and limited competition across thin routes. Yet regional air services can be the lifeblood for communities dispersed across a large land area.

Often air services provide the only year round access to medical facilities for specialist treatment, education, staying in contact with family and conducting business that is essential for the prosperity of that remote community. For the most remote communities, air services are the only viable transport option given the distances involved and, in the north, the very real probability of impassable roads during the wet season.

Airports in regional and remote Australia

Air services to regional and remote communities can only be provided if there is access to reliable safe and affordable airport infrastructure.

The implementation of the Aerodrome Local Ownership Plan (ALOP) during the 1980’s and 1990’s meant that local councils were effectively pressed into airport ownership, replacing the role previously provided by the Commonwealth Government. The diverse range in size and capabilities of regional and remote local councils meant that some have been able to address the managerial and financial challenge of airport ownership better than others. For others, many of these challenges remain only partially resolved.

We outline seven of the challenges facing regional and remote councils as the owners and manager of what is, for many, a vital link to health, education and economic opportunities. 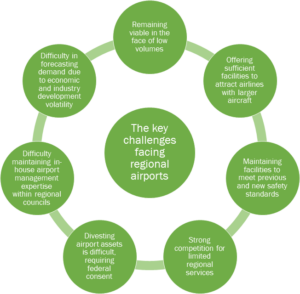 Key challenge 1: Remaining viable in the face of low volumes

Regional airports continue to fulfill a key role of linking regional towns to the broader community. The importance of this role is not fully reflected in financial indicators such as revenue and profitability. Many airports, particularly remote examples, experience fewer flights in smaller planes and, consequently, have limited revenue flowing from aircraft and passenger-based landing fees.

Revenue flows can be disparate from airport upkeep costs. Airport costs are largely constant whereas airport charge revenues can be highly volatile, seasonal or demand-driven, meaning that cash flow problems can emerge. In the case of some heavy loss-making airports, local government have been known to cross-subsidise airport operations with funds from unrelated local government revenue streams, which imperils the provision of other core local government functions.

As passenger demand gradually increases over time, airlines are constantly looking for opportunities to operate larger, more efficient aircraft types. Whilst the potential boost to revenues resulting from the capability to land larger aircraft is a notable incentive, the nature of airlines and the lack of any guarantee that routes will be maintained can create considerable risk for airports that are considering facility upgrades. There is, however, also an opportunity cost associated with not adapting to airline expectations, specifically that airlines can choose to relocate services to other suitable airports where considerable inter airport competition exists. Balancing these considerations is a difficult task facing airport planners.

Sourcing local qualified and experienced labour and material inputs for upgrade works can be difficult, particularly in remote areas. The sporadic and unreliable small-scale nature of regional airport facility upgrades and maintenance coupled with remoteness means that developing a local airport industry base that offers these inputs can be challenging. Firms may only be willing to set up where a sufficient critical mass of demand exists. In circumstances where no local industry exists, regional and remote airports are left with the option of sourcing expertise and materials from much further afield, raising overall costs of works.

In some cases, numerous regional airports situated near each other are forced to compete to be the sole regional destination for limited services. In some cases, larger, more financially robust airports may engage in predatory pricing, reducing airport charges to at or below cost levels for a temporary duration, forcing airports to close. The financial pressure faced by the unsuccessful airports can lead to cuts to infrastructure upkeep that emerge over the medium to long term and become apparent should flights return to the airport.  Impacts are also felt by residents and the community, resulting in longer durations and distances when travel to and from the airport.

The financial position faced by regional and remote airports across the country is diverse, requiring managerial decisions to be made in the best interest of the community. Circumstances may indicate to local government operators that the airport infrastructure under their control might be more efficiently operated by a private entity. However, current legislation (specifically, the Airports Act 1996) places restrictions on airports based on class and specific circumstances. Whilst these provisions are intended more for the larger, non-regional airports that are leased from the Commonwealth, smaller airports are still subject to a raft of ownership transfer provisions. These conditions create an additional burden and can potentially discourage divestment, resulting in retention of ownership being an ongoing burden for some LGAs.

Many regional councils that are responsible for administering airport infrastructure are often not in a financial position to employ staff with specialised knowledge of airport operations, planning and maintenance. If capability is employed in-house, these positions are often considered to be non-core and may be discontinued in tight fiscal periods. A lack of access to dedicated and specialist knowledge can result in poor medium to long term planning and mitigation of issues before they occur.

Key Challenge 7: Difficulty in forecasting demand due to economic and industry development volatility

Employment and industry revenues are usually much more homogeneous than the economies of larger centres, typified by large revenues that flow from mining company operations in resource regions. Whilst often a considerable boon that builds the size and services of local economies, the volatile nature of these industries means that medium to long term revenue streams are uncertain, making forward planning demand for aviation services difficult. Considerable risk is involved in committing funds for regional airport facility expansion when demand for flights which would generate revenue to justify the expansion is far from certain.

Substantial time is required to implement upgrade projects in addition to financial commitments, which further accentuates this risk to Council and airport operators. Airlines are aware of the risks of participating in the regional market and commitment to routes is often fickle and seemingly established services can be quickly removed, even before upgrades are completed. The combination of these risk factors can lead to Councils suspending or abandoning facility upgrade plans or developing the infrastructure with no demand once completed, whilst at the same time burdening council with increased upkeep.

Proactive action by local government and operators in response to these challenges when they arise will ensure that air travel continues to fulfil its vital role of connecting regional and remote communities.

The impact of COVID-19 on public transport demand

Benchmarking the price of public transport